WIth nine schools at .500 or better in Region 4D, and just a fraction of a Power Point behind, Western Albemarle has been in must-win mode since a lopsided defeat in the Jungle two Fridays ago left the Warriors at 3-4.

“Including this and last week, we’ve had to treat it all like the playoffs,” said Western senior linebacker Ross Bassett. “We always talk about rising to the occasion and I think that’s been a good motivator.”

After doubling-up Fluvanna County last week to even their record, Western spoiled Senior Night for cross-county rival Monticello with a 36-8 victory.

“It’s been an interesting year,” said Western coach Ed Redmond. “We’re just a gritty, grinding team, not flashy, and we’re probably right about where I thought we’d be right now. Just a great group of kids who work very hard.”

The Warriors’ rushing attack unveiled a new wrinkle by deploying Bassett in the backfield alongside fellow senior fullback Kyle Keyton. Along with senior Bubba Shifflett, the trio finished with at least 80 yards apiece as Western amassed 295 on the ground for the game.

“We had some races after practice for fun and I won against our running backs, so in practice this week they gave me a shot and it worked out,” Bassett said. “These last couple weeks, we’ve gotten back to our grinding mentality. We’ve pushed the sled a lot more and I think it’s really shown on the field.”

Western set the tone after receiving the opening kickoff by marching 70 yards. Shifflett, Keyton, and Bassett each carried twice, never on consecutive plays. Bassett covered the last 35 as he broke through the middle on a second-and-three carry and outpaced the Mustang defense.

“There was just really good blocking,” said Bassett. “I looked up as soon as I had the ball and all I had to do was put my foot in the ground one time and I was gone.”

Keyton ran in the conversion for an 8-0 lead. After a Monticello three-and-out, Western came right back with a nine-play, 61-yard drive. Junior quarterback Nathan Simon got things started with a 16-yard read-option around the left side. He also capped the series with one of only two pass completions on the night, a flare to senior Tyler Spano in the left flat who spun and accelerated for a 20-yard touchdown. Western led 15-0 after one quarter.

Monticello battled back in the second quarter as its defense forced back-to-back punts while the offense mounted two drives deep into Warrior territory. The first got an assist from a roughing-the-punter penalty before senior quarterback Matt DIxon tossed a swing out wide to sophomore Tre Early who raced 32 yards to flip the field. But an intentional grounding penalty on third-and-5 derailed the drive, which ended on downs. Next time, however, the Mustangs drove 55 yards on eight plays, mixing runs by senior Selorm Kartey and three passes from Dixon to Clarence Feggans. Kartey scored on a five-yard sweep right and Dixon hit Dallas Barnes for the conversion to pull within 15-8 with 5:13 left in the half.

“Give Monticello credit, they took the second quarter and sort of took control of the game,” said Redmond. “We settled down a little bit on offense right before the half with a long drive.”

Western went back to the three-headed ground attack and got back on track. Keyton and Bassett pounded the middle nine times on an 11-play, 65-yard drive that drained all but 10 seconds of the second-quarter clock. Shifflett converted the lone third down with an 11-yard run. Keyton plowed across the goal line from a yard out to put the Warriors up 22-8 at the break.

“I thought our offensive line did a nice job in our short-yardage game,” Redmond said. “With Miller, Vorhees, Lively, Murray, and Tyson Boyd [up front], and Bassett running, I was real pleased with the way we performed in the first half on the line of scrimmage.”

Monticello started the third quarter near midfield after Elijah Fields’ return of a squib kickoff, but Western forced a quick three-and-out. The Warriors then took firm control with an eight-play, 75-yard drive. Shifflett and Simon found space on the edges before Keyton got the call on the last two plays which covered 28 yards and put Western up by three scores.

Monticello’s bid to answer reached the Warriors’ 17 behind four Kartey runs and a 20-yard Dixon keeper, but two incompletions and a fourth-down defensive stonewall extinguished the drive.

“I challenged our guys at halftime about coming out in the second half and establishing our defense, and I think they listened,” said Redmond. “They were a little bit more focused and executed our game plan.”

Western rounded out the scoring when Shifflett cruised in from two yards out midway through the fourth. He finished with 93 yards on 18 carries. Keyton led the Warriors with 94 on 15 attempts, while Bassett tallied 80 on 11 rushes, good for a 7.3-yard average in his offensive-backfield debut.

“We’ve been working on our short-yardage package and just felt like he’s a weapon there, and we gave him a shot tonight,” said Redmond. “He’s super-motivated to do well, and when you’re motivated, things usually happen. We thought that was a good spark.”

Western (5-4, 3-3) hosts Orange County (7-2, 4-2) next Friday in a game with huge Region 4D playoff bracket implications. The Hornets look to clinch a first-round home game with a win, while the Warriors seek to vault into the middle of seeding with a three-game winning streak. 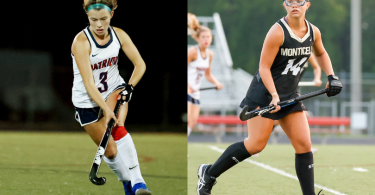