Orange County’s wrestling program has been consistently strong over the years, and they put their strength on display immediately upon arriving in Region 4B for the first time this year.

The Hornets stacked up three individual weight class titles and qualified nine grapplers for the state tournament while barely getting edged out for the team region championship by Eastern View. The Hornets finished with 222.5 points to the Cyclones’ 225.5 points. The three individual championships driving that runner-up performance came from Jose Kincaid’s win at 106 pounds, K.J. Taylor’s win at 138 pounds and David Stiegler’s win at 145 pounds

Kincaid won the first weight class title for the Hornets on the day with a victory at 106 pounds with a 5-3 decision over Lee-Davis’ Ryan MaGill. Kincaid won a quarterfinal 8-5 decision and a semifinal win of 12-9 to reach the title match.

Taylor’s championship at 138 didn’t come easy. At 32-10 on the year, he faced a series of high-scoring matches after a first round pin. He won the quarterfinals 13-10 and then won in the semifinals 10-9. He wrapped it up with a pin of King George’s Jacob Garrant in the final.

Stiegler won the 145 pound championship with a 5-4 decision over James Dosado of Caroline. Stiegler, who was 34-2 coming into the tournament, got a bye in the first round and then had two pins in the quarterfinals and semifinals to advance to the championship.

Beyond those three titles, the Hornets’ had a trio of runner-up performances that earned state tournament berths. Wyatt Mills took second at 113 pounds, Taylor Jenkins finished second at 160 and Truth Wilson finished second at 195 pounds. Ethan Turner took third at 120 while Blake Wilson snagged fourth at 126 and Cole Carr took fourth at 132 pounds to round out the squad’s state qualifiers. Also on the podium for the Hornets were Jackson Garnett who took sixth at 152, Aaron Ratcliff who finished sixth at 170, Alex Burley who finished fifth at 182 pounds and heavyweight Ray Pierce who took fifth.

Louisa County placed 10th as a team in the first year of new head coach Charlie Elkins’ rebuild.  Owen Greslick’s individual title at 113 points led the Lions when the sophomore won a major decision 12-3 over the Hornets’ Mills. The Lions also got a big performance from Zion Villines who finished second for Louisa at 126 pounds. 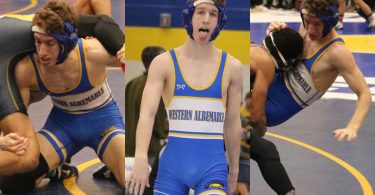 When Western Albemarle wrestling’s Collin Castrina steps on the mat, he has a sense of confidence...