Late in the fourth quarter, William Monroe’s Logan Barbour inbounded right to Frank Lindsay for a seemingly wide open layup that could cut the Skyline lead to two. Lindsay went up with it, but Skyline’s Marlon Jackson came out of nowhere to reject the ball for his third block of the night.

Barbour leapt inbounds, got the ball and was fouled in the process. The Dragons lined up for another inbounds play, the ball coming to Lindsay yet again under the basket.

Yet again, Jackson rejected the shot, and the Hawks quickly pushed the ball down court and scored. It was that kind of night for William Monroe.

The Dragons just couldn’t quite get over the hump all night, falling to Skyline for the second time this season, 55-50.

The Hawks rushed out to an 8-2 lead, with their length caused trouble for the Dragons all night, but Monroe battled back and trailed just 13-8 at the end of the first.

Logan Barbour and Troy Jones spearheaded an offensive spark in the second, and a Tucker Shifflett three late brought the Dragons within one at the half. Both teams came out firing in the third. Jackson stuffed home a two-handed dunk for the Hawks, but it was followed immediately by another Shifflett three to give the Dragons their first lead of the game at 33-32.

A hectic sequence followed, where the ball was turned over three different times, players diving on the floor, finally ending in a Skyline bucket, another unlucky bounce for the Dragons.

Skyline ended the quarter on a 8-0 run, leading 40-33 after 3. Monroe battled back in it with a solid trap defense, but the Hawks stymied them on the other end of the floor, racking up four blocks in the fourth quarter.

Monroe got it to 46-44 at one point, but Jackson’s heroic blocks, paired with Zachary Diggs’ 8 free throws in the fourth quarter iced the game for the now 3-0 Hawks.

Monroe only had five players score in the game. Barbour led the Dragons with 16, Shifflett added 12 and Jones 11. Lindsay chipped in nine. 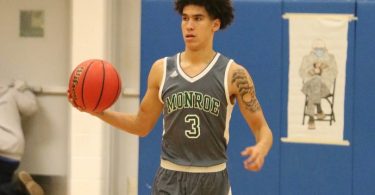 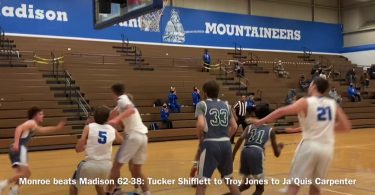