A raucous crowd at CHS for Friday night’s Region 3C quarterfinals saw its boys squad follow the girls’ victory with a snowballing offensive onslaught that ended with an 83-56 triumph over Wilson Memorial. Four Black Knight starters finished in double figures, but Jake Bowling lapped the field with 36 points thanks to lights-out shooting from beyond the arc.

“It was nice to finally play someone we hadn’t seen, and who hadn’t seen us,” said Bowling. “They came out in a zone but didn’t close out hard enough, and so if I don’t see a hand, I’ll shoot it. My teammates did a great job of finding me.”

Charlottesville coach Mitch Minor thought the performance exceeded anything he had ever seen from his senior guard.

“He does it in practice all the time, but maybe not always in the games,” said Minor. “Once Jake hit two or three in a row, we looked for him. This was by far his best game, so I’m glad it carried over tonight in a real game situation.”

Although the night clearly belonged to Bowling, Wilson Memorial’s Matt Poole had the hot hand coming out of the gate. When the Green Hornets’ senior guard drained his third trey to knot the game 12-12 midway through the first quarter, he accounted for all of his team’s points.

“We knew we had to start strong because Charlottesville can get going in a hurry,” said Wilson Memorial coach Jeremy Hartman. “We just didn’t have enough firepower tonight, and Jake literally shot us out the gym.”

It was around that time that Minor called out from the CHS bench, seemingly rhetorically, “who is guarding him?” But two things changed quickly. First, the defense denied Poole the ball in the offensive halfcourt; and second, Bowling drained four threes to help the Knights open a 24-14 lead.

“He (Poole) hit two threes probably about five feet behind the arc, so we just denied him the ball and made it a little harder to get those shots off,” Minor said.

With CHS leading 26-16 to start the second quarter, Bowling kept the hot streak going by knocking down two more threes to make it 32-16 and prompt a Hornet timeout. Poole, meanwhile, had to watch from the bench after picking up his third foul. By halftime, Bowling had connected on eight, plus a pair of free throws to lead all scorers with 26 points.

“[Poole] was good and he was tough,” said Bowling. “I thought Isaiah (Washington) did a good job contesting him, but it was good he got into some foul trouble and had to come out of there, which was nice for us.”

Wilson Memorial rolled out a box-and-one to lock down Bowling in the third quarter. That proved effective at ending the barrage of threes, but it only invigorated the rest of the Knights’ offense, led by junior guard Zymir Faulkner.

“[The box-and-one] kind of opened up stuff for our guards,” said Minor. “We still ran our regular offense, but we had the opportunity to get more dribble-drives and hit our post players in the middle and get some easy layups.”

Faulkner, Christian Stewart, and Isaiah Washington combined for 15 points in the period, and Bowling still got loose before it was over to drain one from deep. He added his tenth in the fourth quarter along with a couple of inside baskets to cap his 36-point night. Faulkner posted 11 of his 15 points in the second half. Stewart added 13 and Washington 10. The student section roared in the closing minutes as senior center Chico RIchardson connected on two buckets in the paint.

“They’re loving what we’re doing,” said Bowling of the crowd, which will have the chance to take in another Region 3C doubleheader on Tuesday night with the semifinals. “They came out last Tuesday for the district championship not even at home, so I’m sure they’ll show out and it’ll be just as electric.”

The boys’ team will take on No. 4 seed Liberty Christian Academy of Lynchburg. 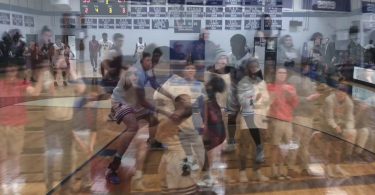