On Tuesday night, Fork Union’s boys basketball team hosted Collegiate in the first round of the Prep League Tournament.

For the Cougars, it was a fast start that got the job done, blazing out to a big lead early on that the Blue Devils never found a way to put a dent into.  Those factors led to what ultimately wound up being a 69-41 win for Collegiate.

“I’m pleased with how hard our group played, and that’s a really good team we played against, can’t make a lot of mistakes against them, we made too many mistakes and they took advantage of all of them,” said Fork Union coach Ben D’Alessandro.

In the first quarter, the Cougars had everything going for them as they surged to take a 25-7 lead. That big lead would prove to be enough for Collegiate, as they extended it each quarter afterward.  The Cougars were led by a multitude of huge performances, which included Mac McDonald with 26 points and Zach McCown with 17.

For the Blue Devils, Maurice D’Alessandro had eight points, while Alex Williams and Nasir Edmond had seven apiece.

For Fork Union, the loss ends their season, the squad’s first under Ben D’Alessandro, formerly the head coach at Covenant.

“I love coaching at FUMA,” said D’Alessandro. “It has been a great challenge trying to teach these young men what it takes to be successful, and we’re trying to create that culture of discipline, hard work, commitment and teamwork. Those are the things that really count for these guys

The Blue Devils certainly appear to be on the right track trying to build up that culture.  Also, there is some potential for the program, as many key players are slated to return next year with only three seniors from this year’s squad.

“It’s going to depend on their level of commitment, whether we can really develop and build on this year,” said D’Alessandro. “This year had a lot to do with establishing a mindset and a culture, and it was all really new to these guys.”

While it is early to think about, all that potential and building upon what has already been established this season naturally leads to excitement about next year for the program. 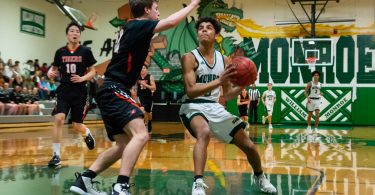