Fluvanna County football came into this week’s matchup with Spotsylvania looking to rebound after last week’s opening loss to Broadway.

Despite a big performance from Isaac Lewis wasn’t the rebound week the Flucos were looking for. The Knights came to town and went to work on the ground as they rolled to a 48-21 win.

“A lot of mental mistakes out there tonight, we had a person not do their job three times on defense and we had another one not do their job twice and that cost us some really big plays,” said Fluvanna coach Mike Morris.

The Knights got the ball first and six plays later found themselves on the board with a 7-0 lead after Mason Christopher found Jefferson Paz for a 38-yard touchdown catch.

The Flucos then stalled on a three and out, but recovered a Knights fumble and were driving deep into their territory at the end of the first quarter. Shortly after the break, Spotsylvania intercepted a Camdyn Via pass and the Knights took advantage of the turnover as Christopher snuck his way into the endzone to give his team a 14-0 lead.

Fluvanna seemed like they were trying to claw their way back as Clayton Cannady’s 31-yard run capped off a five play, 65-yard drive to trim the deficit to 14-7. Cannady ended the night with seven carries for 58 yards and a touchdown.  A second fumble recovery shortly after the score and it began to look like the Flucos were in business.

The Flucos fumbled it back to the Knights though and on the first play of the drive Johned Benton ran through the Fluco defense for a 31-yard score to make it 21-7.

When the second half started, things snowballed for the Flucos, as they lost the opening kickoff and set up the Knights in great field position near midfield.  Benton made the Flucos pay quickly with his second rushing score of the game on another powerful 32-yard run, shaking off multiple defenders in the process as the Knights extended their lead 28-7.

Fluvanna’s Lewis took the ensuing kickoff and ran it all the way to the house to put the Flucos back in business down 28-14.

The Knights started the fourth quarter quickly, as Benton found the endzone for his third time of the game from 21 yards out, giving his team a 35-14 lead.  Benton ended the night with 13 carries for 187 yards and three touchdowns.

On the next kickoff however, Lewis struck again, taking a second return to the house to make it a 35-21 ballgame in the fourth. Lewis ended the game with his two kickoff return touchdowns, giving him three special teams scores in two games.

But the Knights kept their foot on the gas pedal and the hole was too much for the Flucos to overcome, as they added a couple of late scores to leave with a 48-21 victory.

The Knights will look to build off of this performance next Friday when they host North Stafford, while the Flucos will try to regroup and prepare for their road opener at Brookville. 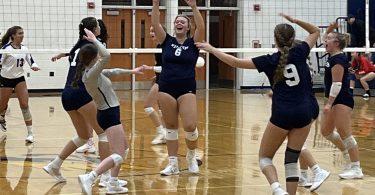 After Western Albemarle volleyball ripped off a 10-point run to win game two and even the match, it...

On a perfect fall afternoon in St. George, Blue Ridge enjoyed success in all three phases of the...