On Tuesday night, the Fluvanna County girls soccer team took the field against Lord Botetourt in the Class 3 state quarterfinals looking to keep their Cinderella season alive with a victory.

Unfortunately for the Flucos, their historic season came to an end with the Cavaliers winning the hard fought, back-and-forth match 4-3. The Cinderella run saw the Flucos enter the Region 3C Tournament as the No. 8-seed before winning the Regional Title and making the program’s first ever State Tournament appearance.

“They have the farthest season in the history of Fluvanna soccer, it’s about the small things,” said Fluvanna coach Kat Ditta.  “Getting up at 6 a.m. since the postseason started, working hard every day, wanting to do the small things right so that the big things would happen.”

The Cavaliers had to deal with the Flucos’ scrappy style of play right out of the gate and that provided a competitive match from the start.  However, it was the Cavaliers who got on the board first with a goal from Ally Spangler, her first of her three goals on the night that gave her team a 1-0 lead with 11:49 left in the first half.

That lead was short lived however with senior captain Maggie McWilliams finding the back of the net with 11 minutes left to tie things up at 1-1.  McWilliams finished with a goal and an assist.  But the Cavaliers and Spangler put up a late goal before the half to give them a 2-1 lead at the break.

Things seemed to be heading the Flucos’ way in the second half however, as they earned multiple corner opportunities and early in the half McWilliams found the other senior captain and Co-Region player of the year Cristina Valladares who tied the match at 2-2. Valladares ended the match scoring the one goal.

After some more scrappy play from the Flucos though, Emma Rice of the Cavaliers got a breakaway opportunity and made Fluvanna pay, scoring with 24:53 left to give her team a 3-2 lead.  Rice finished with a goal and an assist.

The Flucos weren’t done yet, as Evelyn Demers found Abby Ford on a corner kick with 14:50 left to tie things up again at 3-3.  But shortly after that goal, Spangler struck again on an assist from Rice to give the Cavaliers a 4-3 lead.

The Flucos had a couple chances late to tie, but in the end their final comeback attempt came up just short as the Cavaliers won 4-3 to advance to the state semifinal.

McWilliams, Valladares, Ava Amato, Claire Barnett, and Riley Yowell graduate, but Fluvanna will return several key players who will look to try to defend their regional title next season. 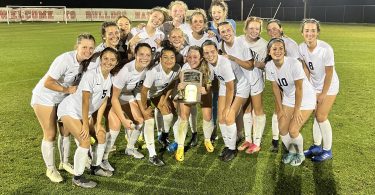 In a soccer world that usually features a lot of the same programs year after year in the...