Covenant’s girls lacrosse team is a marked entity now. The Eagles earned the No. 1 spot in the first VISAA Division II poll of the season earlier this week.

That immediately set up a No. 1 versus No. 3 clash with the third-ranked Virginia Episcopal squad Tuesday, and it was clear the Eagles’ new-found high profile didn’t bother Covenant. The Eagles out-gunned the Bishops 19-14 to pick up a critical win and move to 7-1 on the year.

Kerrigan Poindexter blew up in this one, notching seven goals on just 10 shots, dishing out two more assists and snagging seven draw controls. Locking off a single Eagle has proven fruitless as seemingly every time one players draws more defensive attention, another player’s production increases accordingly.

Delaney Poindexter and Peyton Garber each notched a hat trick and an assist while Anna Kate Simpson dished out a team-high four assists. Delaney Poindextter (who also had three draw controls and six ground balls) and Margaret-Ann Graves each had two assists with Graves also scoring twice. Lina Touririne also chipped in a pair of goals on the night.

The Eagles will lock up with Steward Tuesday before playing another top 10 squad Friday in Trinity Christian. 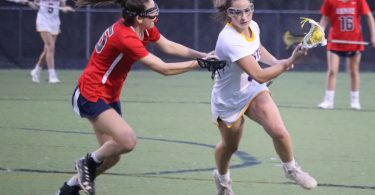