The Western Albemarle girls took fourth overall at Liberty in the Class 4 state track meet, powered in large part by a win in the 4×800 relay on Friday that left the competition in the dust, winning by nearly 16 full seconds. Hailey Hodson, Jenna Stutzman, Sadie Adams and Jordan Stone combined for the incredible performance.

The Warriors got another boost from a third place finish in the 4×400.

That group of distance runners kept stacking up points in the meet, with freshman Sadie Adams taking third in the 3200 and sixth in the 1600 races. They also went 4-5-6 in the 800 meters, with Stutzman taking fourth, Hodson taking fifth and Stone grabbing sixth.

For Louisa County, Dezmajia Carter took fourth in the triple jump and eighth in the long jump.

Western Albemarle’s boys track squad didn’t manage to win the state championship again this spring after winning the Class 3 title last year at Liberty, but the Warriors took fifth in their first year in Class 4 and poted some impressive individual outings.

Western senior Henry Sullivan nearly doubled at states, but the Western Albemarle senior repeated as the state champion in the 110 meter hurdles while also grabbing the runner-up spot in the pole vault in his first state meet competing in that event.

The Warriors’ Jonathan Kumer finished as the state runner-up in the 800 meters and the Warriors also finished seventh in both the 4×400 and 4×800 meter reays. Ben Nitzsche also finished sixth in the 300 hurdles.

Louisa County’s Nicholas Emmert took second in the state in the 3200 meters and seventh in the 800, capping an impressive career for the Lions. 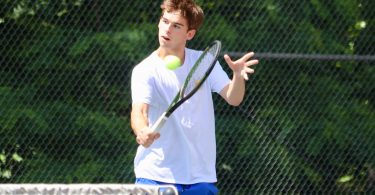 Western Albemarle boys and girls tennis both made short work of Rock Ridge Saturday in the Class 4...