Albemarle volleyball just needed a few points to find their stride in a 3-0 sweep of Monticello Thursday evening.

“We had some hustle plays early on and we didn’t get points on them and sometimes that haunts you a little bit but the effort was there and that’s all I can ask for,” said Albemarle coach Mark Ragland.

The Patriots have always thrived on high energy play, and Thursday was no exception.

“We had a little bit of a slow start but our energy was really consistent throughout the rest of the game,” said Albemarle sophomore Maya Winterhoff. “I feel like that’s really what propelled us to keep a steady lead.”

Albemarle dug out of that early 5-1 hole with solid play at the service line, with Annabelle Townsend providing over a run that included two aces and put the Patriots up 7-5. From there Albemarle just kept things rolling, only slipping up briefly again in game three as Monticello built an early 7-3 lead. Considering the circumstances — starting defensive specialist Kendall was out with a shoulder injury — it was a particularly efficient performance.

“We had to adjust a little bit because we had an injury yesterday so we had to change our serve receive and once they got into it I thought they did a nice job,” Ragland said.

The Patriots got a big night from Winterhoff at the net with 12 kills and three blocks, leading Albemarle in both categories. Adalee Lynch stepped up with eight kills. The Patriots’ approach at setter with Olivia Turner and Keira Roach sharing duties continued to operate at a high level. Turner had 17 assists and Roach added another 10. Their passing got locked in during games two and three in particular.

“Our passing was amazing so we were able to get all of the hitters into it,” Winterhoff said. “The blockers weren’t drawn to one hitter, we were able to swing wherever we wanted, I think that really helped.”

Defensively, Apria Herndon-Scott and Lynch each had six digs. At the service line, Annabelle Townsend and Herndon-Scott each had four aces while Maggie Webber had three aces to go with her 18 service points.

Monticello continues to build on a new foundation of players after losing a number of key standouts to graduation, and Carrie Devine taking over at setter is a big part of that. Devine has proven a steadying presence as just a sophomore and finished with 11 service points, 10 assists and eight digs against the Patriots.

“We’ve got some sophomores and juniors who have so much heart and skill,” Carpenter said. “They’ve meshed really well with the returners and we’ve got a really clear vision of where we want to go.”

Nadja Beauford helped spark Monticello with four kills while Adaire Burnsed led the Mustangs with five kills on the night. 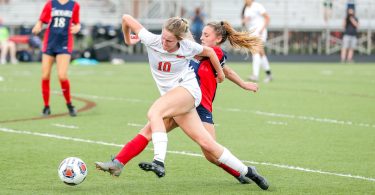 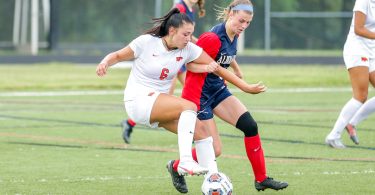 Briar Woods may have needed a reminder, but by the time the Falcons stepped on the field against...