On Thursday evening, the Albemarle boys’ soccer team bounced back from a rivalry loss earlier this week to narrowly defeated a different rival, this time taking down previously unbeaten Charlottesville 1-0.

On Monday, the Patriots fell to archrival Western Albemarle and were hoping to rebound against a tough opponent in the Black Knights.

During the first half, each team essentially traded good chances on each other’s goal. However, neither team gained a competitive advantage, due to excellent defensive play by the squads and both goalkeepers. The first half ended in a stalemate, with both teams locked at zero at halftime.

Coming out of halftime, the Patriots looked like a completely different team. Albemarle looked somewhat conservative during the first half, with Charlottesville arguably being the aggressor early. Albemarle came out of the locker room out intent on changing that dynamic and they were the more aggressive squad from the jump. After a couple of calculated shots on Charlottesville’s goal, the Patriots’ Thomas Reed headed in the game’s only goal off a well-placed corner kick.

“It was a corner kick, and coach has emphasized that piece all season,” Reed saiud. “The ball went back post, Johnny gets it, he heads it back across the net, and I’m luckily there, sitting there, and I just tapped it in with my head.”

Although the Black Knights are a tough out, especially on their home turf, Albemarle head coach Zach Laird was proud of his team’s victorious efforts on the field.

“It’s always a tough place to play coming over here,” Laird said. “They’re always fired up, it’s a great atmosphere, so it’s tough to come here and play, but we came ready from the first whistle, and we carried it all the way through the whole 80 minutes.”

With Albemarle scoring relatively early in the first half, Charlottesville had several opportunities to try and tie up the game, but never took advantage of them due to poor execution.

“I think the guys down one, worked pretty hard; brought a lot of intensity, got some chances at the goal,” said CHS coach Martin Braun. “Unfortunately, we didn’t play up to our level today, and didn’t deserve the result (we wanted).

After a tough week in opponents, Albemarle will face Goochland on the road on Monday, and the Black Knights will face Louisa on Monday. Charlottesville will have a chance to avenge their loss on May 9th, as they look toward a rematch against Albemarle on the Patriots’ home turf. 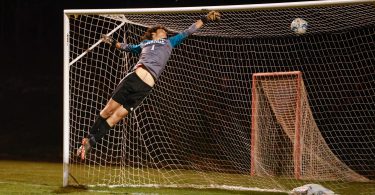 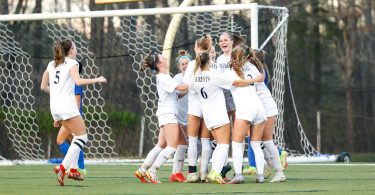