Injuries can be difficult to overcome for any team, but when that injured player is your leading scorer, it makes the ensuing challenges that much harder.

Albemarle’s boys basketball team is working through that problem for the second straight game with Josh Morse out of the lineup when the Patriots  visited Fluvanna Tuesday night. Albemarle was up for the challenge against the Flucos, picking up a 63-56 victory over the Flucos.

“We’ve had back-to-back games without him, and we came out on the road and we’ve come out with two wins, so I’m pleased with how hard my guys are playing,” said Albemarle coach Greg Maynard.

Without Morse in the lineup, the Patriots leaned on that hard work and some stingy defense to beat the Flucos.

In the first, Albemarle seemed to score at will from anywhere on the floor. Defensively, for most of the quarter they gave nothing to the Flucos, holding them to four points in the first five minutes. Leading the charge for the Patriots was Jackson Rose, who had seven of his 15 points in the quarter. But the Flucos began to fight back late in the first, and went to the second trailing 15-10.

In the second quarter, it looked as if the Patriots were going to take control and begin to pull away. They were forcing turnovers and getting points on the break, and in their offense, they were able to find a lot of success driving the ball and finishing at the rim. Justin Murkey scored six points in the quarter to lead the team. Murkey finished the night with 16 points, eight rebounds, and five steals.

But the Flucos showed some fight, refusing to go away quietly. They battled back, knocking down some perimeter shots and converting opportunities at the free-throw line. Isaac Rivera put up 7 of his 17 points in the second as well. The late surge helped the Flucos turn it into a more manageable game,cutting the lead to eight heading into the break.

In the third, the Flucos cut into the deficit even more, and the Patriots were really starting to lose their grip on the game. But a few key steals from the Patriots gave them easy points in transition, and the momentum completely shifted.  One bucket after the other, Albemarle rebuilt its lead and then some, taking a 49-37 lead to the final frame.

“I just told them to play every possession the best they can — that means execute well on offense, and play tough on defense and make them have to take tough shots and go after the boards,” Maynard said.

That’s exactly how Albemarle finished the game, playing hard as a team and executing their game plan.  A late effort from the Flucos made it closer, but the advantage Albemarle had already built proved too deep of a hole for Fluvanna to climb out.

Albemarle will be at home on Friday against Charlottesville, while Fluvanna will go to Orange on the same night.

The 2020 VISAA state tournament brackets for basketball are out. Here’s the rundown. VISAA... 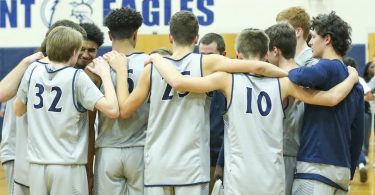